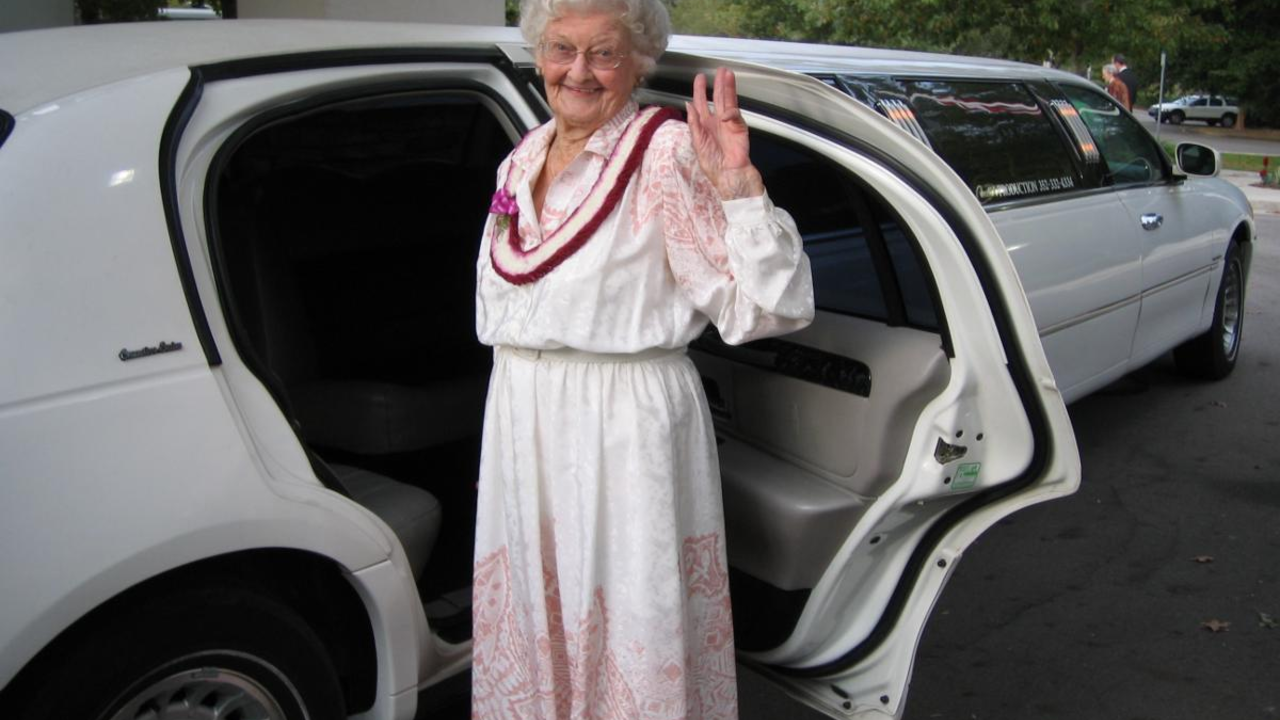 Image Above: Laure Carmichael at her 100th birthday party at Haven Hospice

Retired bank teller Laura Carmichael had no children; widowed at 65, she was know for her legendary thank you notes, she clipped out the photos of brides in the newspaper and mailed them to the newlyweds, she drove the same Buick for nearly 20 years, and sent a crisp $1 dollar bill to every child chosen as “Student of the Month” at the local elementary schools. Generosity was in her bones.

Laura lived near the local hospital where she volunteered and was on their board of directors and on the hospice board where I was Executive Director. When we began talking about the need for a hospice house we didn’t know where the money would come from to build it – until Laura came to my office and said, “I want to give my home to hospice for a hospice house.”  She had lived there 60 years, but she had made up her mind; “Sell it if you want and use the money as the seed to get the project started”.  She moved to another home, we sold her house and indeed the seed she planted took root; we built the 18-bed care center and administrative office building thanks to her generosity of spirit, time, courage and money.

I met Laura when she was 78 years old.  She died at 101 in the hospice care center she helped to create. At her funeral, the church was not large enough to hold all those who came to pay their respects to this bank teller whose great compassion and unconditional love left a legacy.

Dr. E.T. York was a tower of a man, born in the Alabama hills of Appalachia, the son of a poor farmer whose mother sold the family cow so they could move to a town with a school he could attend.  He went on to work with five presidents, from Kennedy to Reagan, laboring tirelessly to end world hunger.  He was the Chancellor of Florida’s State University System, Interim President of University of Florida, and a great advocate for hospice.

When he accepted our invitation to become the chair of our hospice’s capital campaign, Dr. York made home visits with nurses to learn more about the hospice’s team and work. The more he learned, the more passionate an advocate he became and the more convinced he was of the need for the care center.  His tremendous gift to us was his influence. His belief was that hospice was a community treasure not to be “owned” by one hospital or another but to be supported by the entire community.  He brought people together.

When the hospice facility was built and the campaign nearly closed, Dr. York’s wife came into my office and said, “I want to see that the Care Center is named after ET.  I know where we can get a matching grant, I want to put up the other half and I want this to be a surprise for him”.  The ET York Care Center where Laura's Garden offers solace and inspiration to those in need is a treasure in our community today thanks to both Laura and ET.

Leaving a legacy begins with care, great compassion and unconditional love.  Caring about something deeply enough to give of your time, your influence, your ideas and your money can transform any condition or organization.

What will your legacy be?